There is no gain saying that the outbreak of Corona Virus (hereinafter referred to as COVID-19) has resulted in a standstill or at least a substantial breakdown of activities in virtually all aspects of life. While some have argued that the virus is a natural occurrence, others are of the opinion that it is a man made biological weapon. However, as lawyers, of even more valid concern, is the consequence of this pandemic on pending contracts and contractual obligations. The basic question begging for an answer would be; would COVID-19 qualify as a force majeure event? 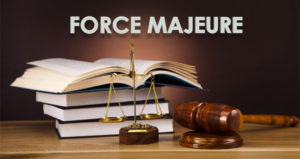 WHAT IS FORCE MAJEURE?

“Force majeure is something that is unexpected and unforeseen happening, making nonsense of the real situation envisaged by parties”

“Force majeure according to Black’s Law Dictionary 8th Ed, is an event or effect that can neither be anticipated nor controlled. It includes both natural and human acts. The human acts may be political in nature including riots, strikes or war.”

Force Majeure, which is known by lawyers and non-lawyers alike as the “Act of God” clause is a French term that literally translates to “superior force.” It is not unusual to find force majeure clauses in standard contracts across all industries ranging from Banking, construction, sport, corporate, telecommunications, and several industries. The purport of this clause is to make provision for acts that are capable of frustrating or preventing the performance of contracts which are not within the powers or as a result of the fault of neither of the parties.

With the declaration by the World Health Organization (WHO) on 11 March 2020 that COVID-19 has attained the status of a ‘pandemic’ and with the announcement by governments across the globe of measures to prevent the further spread of this virus to include self isolation, social distancing and quarantine, it has become impossible to enforce contracts as almost all social and economic activities has been shut down. It is pertinent to state that, it is of immense relevance as an example is sport contract. Considering the suspension of almost all sporting activities across the world, there have been arguments as to the effect of COVID-19 pandemic on sport contracts. Not forgetting minor contracts like flight ticket bookings, event organization, purchasing and supply contracts to mention but a few. 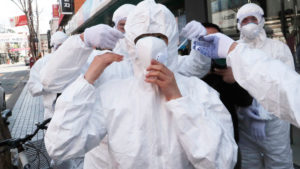 DOES COVID-19 QUALIFY AS A FORCE MAJEURE EVENT?

For an act to qualify as an act of God under the doctrine of force majeure, such act must be unforeseeable as at the time of entering into the contract, unavoidable in terms of occurrence or impact and must be impossible to overcome. It would be safe to say that nobody could have reasonably foreseen the outbreak of COVID-19 and the virus is not within human comprehension.

Recent governmental regulations intended to contain the COVID-19 outbreak may similarly make it easier to invoke a force majeure clause not previously triggered by the virus. Ever-expanding governmental restrictions on travel, movement, and large gatherings have resulted in significant business interruptions and widespread event and travel cancellations, with a particularly salient impact on the event, tourism, restaurant, airline, venue rental, and sports and entertainment sectors.

Force majeure clauses typically specify those events that constitute force majeure. Some of the typical circumstances identified in a force majeure clause include acts of God, war, riots, natural or other disasters. In some cases, “epidemic,” “pandemic,” “quarantine,” and/or “disease” are expressly enumerated. Many force majeure clauses also contain an omnibus clause that covers all other events “beyond the reasonable control of the parties,” which may be applicable to events relating to COVID-19. 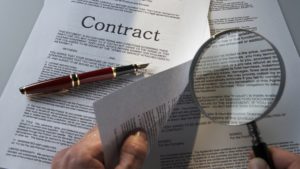 THE DOCTRINE OF FRUSTRATION OF CONTRACT

“Frustration would occur where it is established to the satisfaction of the court that due to a subsequent change in the circumstances which was clearly not in the contemplation of the parties, the contract has become impossible to perform. There must be an event which significantly changes the nature of contractual rights of the parties that it would be unjust to expect the parties to perform those rights”

The court went further to posit that the doctrine of frustration has been restricted by the courts to:

“A contract is frustrated where after the contract event occurs which make performance of the contract impossible, illegal or radically different from what was in the contemplation of the parties”

However, in the same case, the court made it very clear that the doctrine of frustration is not one to be exploited by parties to exclude themselves from the performance of legal contractual obligations. The court noted as follows:

Therefore, a contract may be frustrated by the coronavirus pandemic where it becomes impossible to perform, or where, as a consequence of coronavirus, a party’s contractual obligations become radically different to what was envisaged at the outset.

It must be noted that If a contract is frustrated, the contract will immediately be terminated, and both parties released from performance. This was made clear in the case of SAKA V IJUH (2010) 4 NWLR PT 1148 @ PG 410 RATIO 11 where the court explained thus:

“Frustration of contract arises when an event occurs through no fault of either party to the agreement which fundamentally altered it and which was not in contemplation of the parties, such that they could not make provision for it. In such a situation, both parties to the contract would be discharged”

“In circumstances in which the performance of an obligation depends on the continued existence of a given thing, a condition is implied that the impossibility of performance arising from the perishing of the thing shall excuse such performance”

With the continued prevalence of the COVID-19, it would become pertinent to begin to examine contracts to confirm whether it contains a force majeure clause or not or whether the force majeure clause makes provision for pandemics such as the present one. Also, moving forward, in drafting new contracts, the relevance of force majeure clauses should not be underplayed as they play a very prominent role in unforeseen and uncontrollable circumstances. If however, a contract has been found not to contain a force majeure clause, recourse could be had in the doctrine of frustration of contracts and other equitable methods of dispute resolution.