Mike and Ted are best friends who intend entering a business relationship. In order not to cause a strain in their cordial relationship, they inserted an Arbitration clause in their contractual agreements to forestall a situation where any of them will have to approach the Court of law to settle any dispute that may arise. Presently, Mike has breached the contractual obligation to his friend -Ted and instead of the usual protracted Court cases, Ted has decided to enforce the Arbitration clause by commencing an Arbitral proceeding, so as to ensure that their business relationship is resolved without affecting their cordiality as friends.

Arbitration is one of the alternative dispute resolution mechanisms just like Conciliation and Mediation, usually party driven to ensure that parties personally oversee the settlement of their dispute and ultimately abide with the Awards and settlements that arise from the procedure for settlement adopted by them.

The law that governs arbitration in Nigeria is ‘The Arbitration and Conciliation Act 1988′, which is the principal legislation which is the Federal law on arbitration now known as “Arbitration & Conciliation Act, Cap A18 Laws of the Federation of Nigeria (LFN) 2004”- The Act is based on the UNCITRAL Model Law and incorporates the UNCITRAL arbitration rules. Also, the Act ratifies and incorporates the New York Convention on the Recognition and Enforcement of Foreign Arbitral Awards (NYC).

In Lagos state, we have the following: 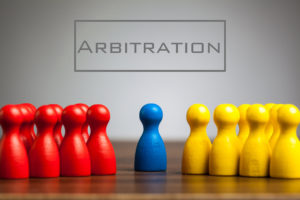 The procedure is provided for in the Arbitration Rules in the 1st Schedule of the Arbitration & Conciliation Act Cap A18 Laws of the Federation 2004 which shall govern arbitration proceedings, it shall be to the exclusion of the Agreement of the parties.

Composition of Arbitral Tribunal – Section 11 of the ACA

Section 31 of the Arbitration and Conciliation Act Cap A18 Laws of the Federation 2004 makes provisions for the enforcement of the domestic arbitral award and it is provided as follows;

(1) An arbitral award shall be recognized as binding and subject to this section 32 of this Act, shall, upon application in writing to the court, be enforced by the court.

(3) An award may, by leave of the court or a judge, be enforced in the same manner as a Judgment or Order to the same effect. 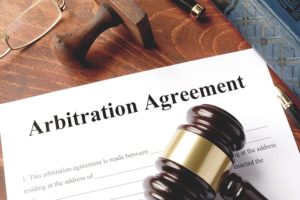 (1) An arbitral award shall, irrespective of the country in which it is made, be recognized as binding and subject to section 32 of this Act, shall, upon application in writing to the court, be enforced by the court.

(a) The duly authenticated original award or a duly certified copy thereof;

(b) The original arbitration agreement or a duly certified copy thereof; and

In the case of IMANI & SONS LTD. v. BIL CONSTRUCTION CO. LTD (1999) NWLR 12 (Pt. 630) page 253 at 263, the Court of Appeal held that in addition to the motion on notice filed by the party seeking enforcement, the party also needs to provide the following simple requirements;

(3) The name and last place of business of the person against whom it is intended to be enforced;

Also in the case of EBOKAM v. EKWENIBE & SONS TRADING COMPANY (2001) NWLR 2 (Pt. 696) page 32, the Court of Appeal listed additional requirements needed for a party seeking recognition and enforcement under the New York Convention. The requirements are as follows;

2. That the dispute arose within the terms of the submission;

3. That arbitrators were appointed in accordance with the clause which contains the submission;

4. The making of the award; and

5. That the amount awarded has not been paid.

Once the Court recognizes the award by granting leave to the creditor to register same, it shall be enforced as a judgment of that Court.

There are two (2) other ways to recognize Arbitral awards in our Jurisdiction, which are ;

UNDER THE REGISTRATION OF FOREIGN JUDGMENTS STATUTES

The Foreign Judgments (Reciprocal Enforcement) Act, Cap F35, Laws of the Federation of Nigeria, 2004 regulates the registration of foreign judgments in Nigeria. For an award to be recognized under these legislations, it must be registered in the court of the country where it was made and become enforceable in the same manner as a judgment given by the court in that jurisdiction. In Tulip Nig. Ltd v Noleggioe Transport Maritime S.A.S, (2011) NWLR 4 (Pt.1237), 254, the Court held as follows:

Arbitral awards can be enforced by commencing an action upon the award. In the case of a foreign award, it is inconsequential whether there is reciprocal treatment in the country where the award was obtained or not. In TOPHER INC. OF NEW YORK v EDOKPOLOR (TRADING AS JOHN EDOKPOLOR & SONS) (1965) 1 All NLR 1, 307, The Supreme Court held as follows:

i. A party is not prevented from suing upon a foreign judgment regardless of whether there is a reciprocal treatment in the country where it is obtained if no order is made under section 124 to modify that position.

ii. A suit brought upon a foreign award ought not to be struck out merely on the ground that there must be a treaty guaranteeing reciprocal treatment in the country where it was made or an Order in Council to that effect”

The Principle in Topher’s case is based on the Doctrine of Obligation which postulates that if a foreign court of competent jurisdiction has adjudicated a certain sum to be due from one person to another, the liability to pay that sum becomes a legal obligation enforceable domestically by a debt action.

The modern-day arbitral process has lost its early simplicity. It has become more complex, more legalistic, more institutionalized. It has become a common postulation that arbitration increasingly resembles litigation, particularly the fact that arbitral institutions have over the years evolved rules of procedure somewhat akin to High Court procedural rules. More regard is now given to form rather than content. Arbitral proceedings have become more and more similar to litigation but we cannot over-emphasize its relevance in national and international commercial transactions.

In spite of all the attendant problems associated with arbitration practice in Nigeria today, arbitration has come to stay as a veritable tool for alternative dispute resolution. Finally, in Nigeria, arbitration is still very relevant as a dispute resolution mechanism especially in domestic and international commercial transactions, and if its advantages are properly harnessed, will decongest the perpetually congested cause lists in our courtrooms.

“An arbitration is the reference of a dispute or difference between not less than two parties for determination, after hearing both sides in a judicial manner, by a person or persons other than in court of competent jurisdiction.”

“A final judgment or decision, especially one by an arbitrator or by jury accessing damages.” – Also termed Arbitrament

“A neutral person who resolves a dispute between parties, esp. by means of formal arbitration.